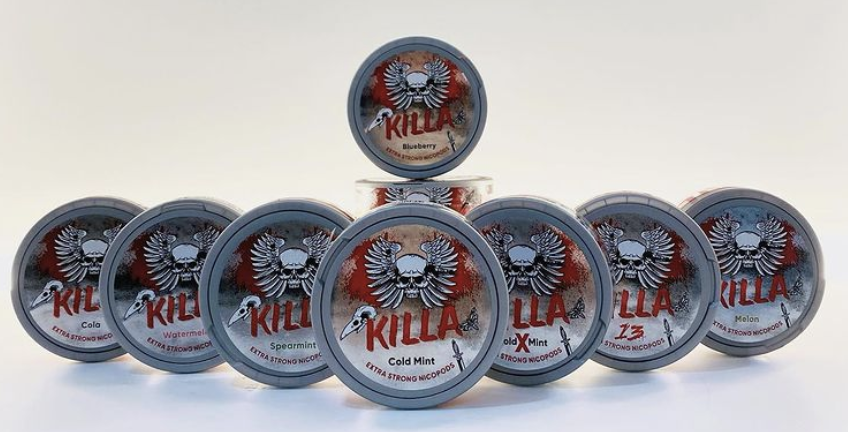 Killa nicotine pouch products, including Killa, Pablo, BLOCK and Extreme are created by NGP (Next Generation Products) Tobacco APS. Formed in 2018, then called NGP Empire Sweden AB launched their first two, and most famous products: Killa and Pablo. Killa nicopods come in at 24mg/g, with ten flavours in Cold Mint, Cold Mint X, Cola, Blueberry, Watermelon, Melon, Spearmint, 13 (Energy Drink) (which has recently been reproduced with a much improved formula for a better taste and smell), and the brand new Killa Apple and Killa Pineapple. Killa and Pablo Cold Dry tobacco-pouches/chew bags are beginning production soon, where they will attempt to replicate the famous Siberia and Oden’s chew bags. Pablo, Killa’s stronger cousin is a whopping 50mg/g. Pablo nicopods are available in the minty ‘Ice Cold’, and the mint/tobacco flavoured ‘X-Ice Cold’, although it is still tobacco-free. NGP’s next pouch came with BLOCK, which has largely been replaced with Extreme White. Extreme White are 16mg/g nicotine pouches and have a similar nicotine hit to Killa, except at two-thirds of the strength, Arctic Mint especially is a slightly weaker, much nicer tasting version of Killa Cold Mint. Extreme White come in three other flavours; Neuron Freeze, Lime Paradise and Fruit Vibes. Killa’s most recent addition to their nicotine pouch range are the Extreme Black nicopods. At 30mg/g, these all-white pouches are to Pablo what Extreme White are to Killa: weaker, with a MUCH nicer flavour. Extreme Black nicotine pouches come in four different flavours; X-Cold, X-Freeze, X-Lime and X-Iceberry. Killa don’t just make nicopods though, the relatively new Haiza is a tobacco-free, nicotine and CBD pouch. Containing 16mg/g of nicotine, and 16mg/g of CBD Haiza gives you relaxing hit, a combination of nicotine and CBD.

Age Verification
You must be 18 or older to view this site. Please confirm your age below
I'm Under 18
How old are you?
I'm 18 or Over